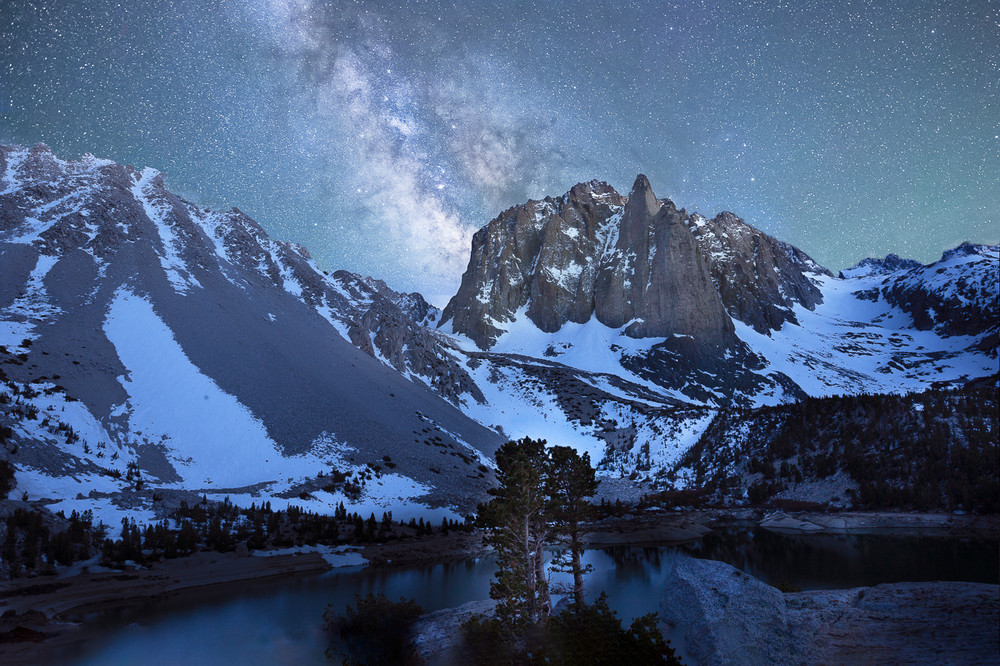 Temple Crag and the Milky Way

The day started calm, blue bird Sierra sky at its finest. My son, Dylan, and I set out for a dream image I have wanted to shoot for years. The Milky Way over Temple Craig ... what a sight to see this will be. We meandered up from the desert, the sound of high elevation winds gently singing through the air. Around 3pm we took a short break, “the temperature sure is dropping” we commented... the winds now notably stronger above us..

We reached camp and immediately needed layers. It was cold, very cold. By 9pm the preliminary shooting had begun. We were dressed in all our clothing, me in multiple layers of down and Dylan in a large expedition grade parka. The wind was howling and the tripod was held securely with a large sack of rocks. We grabbed a few preliminary shots and headed to bed,alarms set for 130AM, waiting, as the Milky Way drifted into position. The alarms sounded but neither of us had slept, violent gusts had kept us wide awake. We piled rocks on our sleeping bags and struggled to stand against the prevailing wind. Returning to the image location revealed the tripod, star tracker, camera, and sack of rocks all on the ground. A gust had clearly dominated our logical use of weight. Shivering and with numb fingers we struggled to get the set-up back. Our first few shots proved complete failures. Blurred stars, blurred image, something wasn’t right. Close inspection proved the star tracker had suffered a fatal wound in the fall. Cracked, damaged, and wiggling it was removed. Morale was quickly dwindling into the darkness. We were getting blown over, hats blown off, stumbling, numb, frozen knobs, camera moving and falling. With wind now gusting upwards of 60mph it wasn’t looking good for this dream image requiring a motionless 20 second exposure. We struggled for an hour, time and time again, 3... 2... 1... shooting... Dylan pulled down with full strength on the tripod as I attempted to shelter the camera. We shot roughly 30 images that night before finally giving into fatigue ... and one ... only this one image turned out sharp.

Crystal Crag and the Milky Way