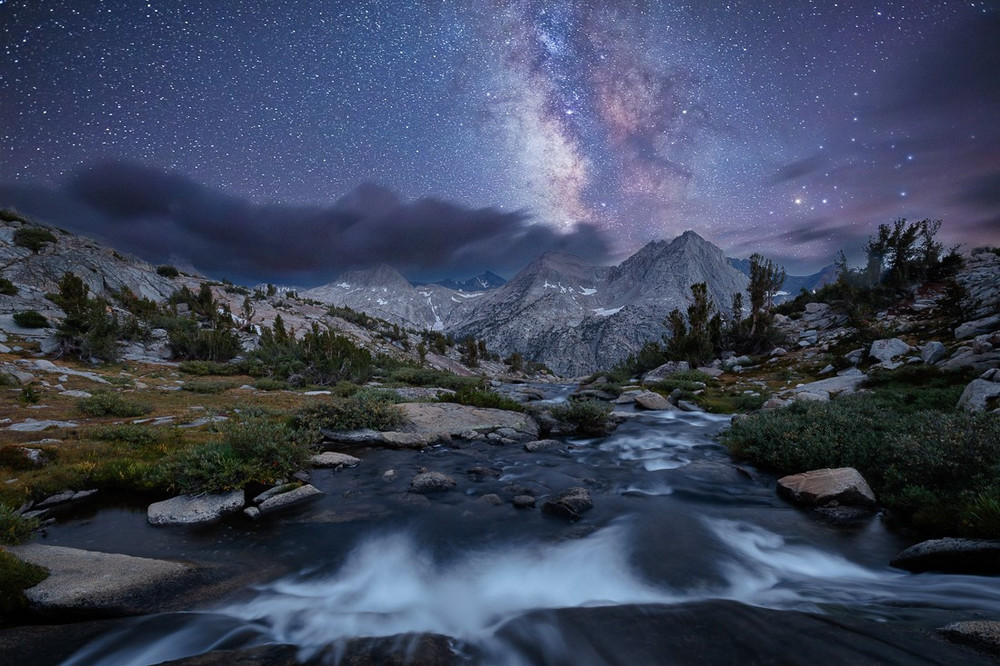 The Milky Way over the Evolution Peaks

In September 2017, Margaret and I ventured out on a long and exciting journey into the wild farthest-reaches of Kings Canyon National Park. With the weather forecast in mind, I had an idea for an image for the second evening. I expected rain in the afternoon followed by some clearing followed by clear skies in the early evening to shoot the Milky Way over the Evolution Range. I made a few captures after sunset, or what is called the “blue hour” and identified the spot I would place my camera for the Milky Way shot; but with the return of more hard rain hard, I packed up my camera and figured it was over. Then at 8 p.m., there was the Milky Way, just as I’d hoped! I flew out of the tent, once again hopeful. But I couldn’t find the exact location in the dark with the rain; and although I tried my best with a few minutes of light from the sky, once again the rain and cold was back. It was time to abandon the idea.

I realized later that my skills were not up to par for the image that was in my mind’s eye, and the Milky Way over the Evolution peaks remained unrealized for years as I lamented what was likely a once-in-a-lifetime opportunity. In 2021, I reserved a Wilderness Permit to go out and try it again. As I was packing, it occurred to me to revisit my older images. My understanding of Photoshop and Lightroom and how they work together has evolved every year. Reviewing old images in my files allows me to avoid duplicate shots and, more importantly, I can obtain information which might lead to a more successful capture. Most images of the Milky Way are made up of two or more captures in the field. I was aware of the concept in 2017, but I’d never grasped how effective it was for presenting what is actually there but that the camera cannot record at one moment of exposure. Returning to one of the captures from 2017 from the “blue hour”, I discovered it had all the information Lightroom needs to present the foreground as I envisioned. And the same astonishing sky could be used too. There were issues combining the earlier blue-hour images with the later Milky Way images because I hadn’t placed the camera in the exact same spot in the dark and rain in 2017, but I was now armed with the skills to make the image real. After all was said and done, I returned my permit and stayed home with Margaret.

The Milky Way over Mono Lake

The Milky Way over Evolution Basin